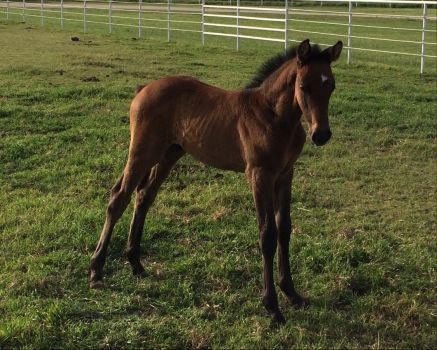 Just 6 weeks old and what a handsome boy he is! Find his heart❤️
Created by KristiWolfe Published 15 December 2015
Why this advertisement?

Surreal_Heidi, Awwwe we hope she stays chestnut we will have so many greys we won't be able to tell them apart! You are probably right, however, we thought the lil 2015 (posted) colt may stay bay but he is already beginning to turn on us! WOW you have my respect for your riding career. It's a tough life and one that Gianna has truly embraced. We bought the D4 for her and her incredible love for these amazing creatures. I will be going with her and a couple of her clients to Wellington in January. Very much looking forward to this show.

That filly MAY surprise you by starting to turn grey later in life, say starting at 2 or 3 years old.

The first show jumper I ever owned was a flea-bitten grey gelding who was consistant over 2 meters. Wonderful jumper, but an awful horse outside the arena. I learned later that his sire was a top bucking horse, which is where he got his stubborn streak and unpleasant disposition. I shattered my knee going over a chicken coop oxer on him (I stayed on him, but had to be lifted off) during my first intra-team competition getting ready for the Pan-American games. I'd just made the Costa Rican team the week before. That was the end of my show jumping career.

WOW Surreal_Heidi, you definitely know your stuff! I could not have explained it better. Wolfie is flea-bitten so he will probably turn pure white. His Sire is a dapple and his Dame is bay. Grey is dominant over any of the colors. Quidditch (grey) has gone on to sire 14 foals and all but 3 are grey. In fact, almost impossible my last posting of the filly with the grey mare. Both parent are grey but filly will be chestnut:)

Greys are all born non grey, with only a few white hairs, usually around the eyes or on the ears. Of course, the white markings that they can have are independent of the body color. Each time they shed their hair, it grows back in with more white hairs. Depending on the breed, they'll end up all or mostly white between the ages or 7 and 10 years old. There are 2 main greying patterns: dappled and flea-bitten. The dappled horses tend to maintain some color on their legs most of their lives, and the flea-bitten horses retain a sprinkling of individual colored hairs over the body.

Surreal_Heidi he is very special to me. His barn name is Wolfie and truly has an amazing heart. His heart is now fading because he was born a Gray. He is 2 in March and is now half way between buckskin and white. By the the time he is 7 he will be pure white! I love him so much.

I once had a colt born with a heart on his forehead like that. He was also born on Valentine's Day!!! His name was Enamorado (Spanish for Lover).