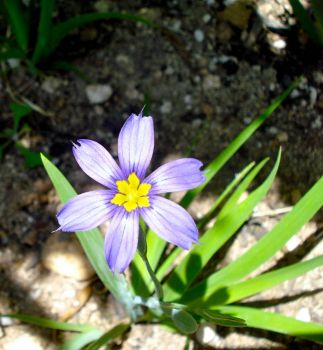 Created by Robbiel Published 13 November 2012
Why this advertisement?

Thank you too Hanne.

Such a fine little beauty!! Thanks so very much Robbie!!

Why thank you PPM and Jacques.

Robbie, your horticultural expertise is simply astounding. You have again identified a rare specimen of "purple flower."

It is small but quite hardy, thanks svediga.
Tex you're a hoot!! Their favourite track is "The Wall!!" Unfortunately for Jenny she doesn't like it!
It is Shirley, thanks.

Now - The scientific name is Sisyrinchium Bermudiana ( Blue-eyed Grass.) It is a perennial and widespread through North America but confined to Northern Ireland on the other side of the Atlantic. It was wrongly named when Botanists felt it was endemic to Bermuda. We don't care, it is our unofficial national flower.....even if some think it is a weed!

The botanical name is Pinkus Floydium, and playing music too loud makes them more abundant! Thanks, Robbie, pretty.

Looks tiny and fragile for a weed. Very beautiful. Thanks, Robbiel.

Thanks Celeste, it certainly is a pretty flower.

wow love the colors on the purple.. Sure do got some pretty weeds Robbie :)

Thanks gem, Jenny took all of these around the neighbourhood.

The intensity of the light makes it look painted. Lovely photo.

It is pretty Ank and we never remove them, thanks.

If that weed was in my garden I would not remove. It's too nice

Thanks Graci (in the mail!), chickie and PK.

It is very pretty for a weed Robbie. Love the set thanks

Very pretty it is.

A very beautiful weed, if you don't want it send it to me. thank you Robbie