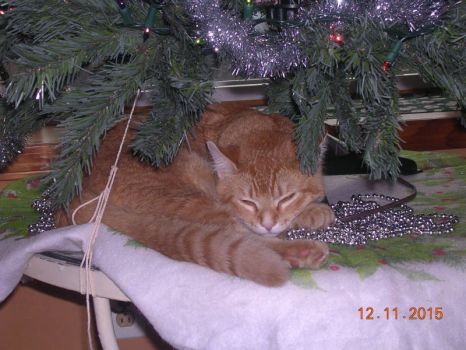 but see the string holding up the tree? And the beads on the table? and NO ornaments on the tree?
Created by donnebrook Published 27 December 2015
Why this advertisement?

No ornaments on the tree! I LOVE it! I get the string...we always have to tie our tree up!

Sweet kittenhood will it never end?

Thanks, niccolino59, diannepuzzle, and ladywil2! He does look like a lynx! And he also looks innocent!

We had the same with our cats. Balls all over the floor and the same for those bead thingies.

If you believe it hard enough, it's the truth !

Ah-ha! What a fabulous tail, and just look at those ears! Reminds me of a lynx!