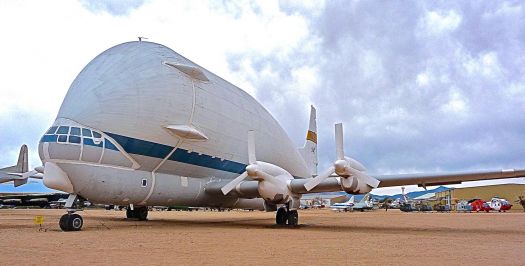 Created by GST38 Published 21 November 2020
Why this advertisement?

This is the description on the Pima Air and Space Museum web site;

Based on the Boeing C-97 cargo plane and the Boeing 377 airliner, the huge "Guppy" super-transports are some of the most unique aircraft ever built. Designed to carry very large, but relatively light cargos, the Guppies were built from parts of retired U.S. Air Force C-97 Stratofreighters and airline 377 Stratocruisers. The planes proved to be very useful for carrying segments of rockets and many of the Saturn rockets that powered the Apollo Program were transported in the Super Guppy. This is the second Guppy, the first "Super Guppy" built. Its parts came from at least two different aircraft. Most of the airframe came from a former Pan American Airways airliner. However, the wings, engines, and forward fuselage came from one of the Air Force's experimental turbo-prop powered YC-97J aircraft. The Super Guppy continued in use by NASA until 1991 when it was retired in favor of a younger Super Guppy

I also used to see them every day, mid-1960s, going out of Linberg Airport, San Diego. My ex-Convair employee friends from said they were carrying body sections for 747s to Boing, Seattle.

No idea how many of these were constructed, but one flew for many years (1960's) at the Van Nuys Airport, CA. Saw it almost every time I passed, assume it transported stuff to or from the Rockwell test pad in the Chatsworth hills where rocket engines were often seen blasting in static tests.