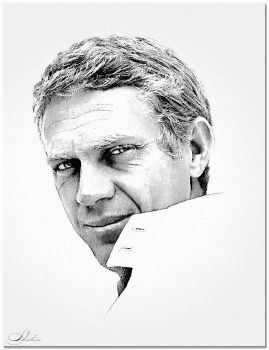 Terrence Stephen McQueen (1930 – 1980) was an American actor who was nicknamed "The King of Cool". He was the ultra-cool male film star of the 1960s, and rose from a troubled youth spent in reform schools to being the world's most popular actor. Over 25 years after his untimely death from mesothelioma in 1980, Steve McQueen is still considered hip and cool, and he endures as an icon of popular culture.

I used to be in love with him when I was around 9 yrs old.
Created by MarinaNephele Published 11 May 2020

MarinaNephele - Thanks for the hint on Charles, it was dark and chilling and so well played if it is the one I was thinking of it.

Deanna, the '60s marked the appearance of great actors and the Magnificent Seven proved that. They were all great, even young Buchholz who became a star on his own years later (he was the next love of mine at 10yrs old).

Thanks Janet. I think I could always remember him on a motorbike, giving an air of freedom to love life. Shame he died so young.

Hi Eva, you are so privileged to have him in your church years back! He was such a great guy and he is still remembered well.

Hummingbirdlvr, I haven't seen the documentary but now you mention it I'll search for it. Thanks.

Deanna, I've watched most of his movies but in the Magnificent seven he was GREAT!. And in Thomas Crown Affair he was such an original, much better than the movie's sequence with Pierce Brosnan.

You are welcome Voronica, I'm happy you liked Steve.

sbwilner, he was talented and had plenty to offer. He had a very interesting life too.

Hi dhi, Steve was the best bad boy with his cook character and twinkling eyes. About Charles Bronson, I was a great fan of him to and I've seen plenty of his movies. The one he played the detective was "10 to Midnight", I think.

This is around the time I became fascinated by Charles Bronson. I can't recall the film I am thinking of but it seems to me he was a detective trying to solve a murder, maybe, don't know.

Yes Jill, I agree with you, it was a stellar cast and a great storyline, its original idea comes from Japan under the name "Seven Samurai" and it was a true story. Do you remember the legendary "cat walk" of unforgetable Yul Brynner, the amazing senzitive Charles Bronson, excelent James Coburn, of course the charisma of Steve McQueen and also the young Horst Buchholz who became a big German star. I think that such a concentration of excellent acting performances is unique and unforgettable ♥:))
Marina, thank you for this lovely memory ♥:))

I loved him in The Great Escape on that motor bike! A fabulous movie icon. Thanks and hugs Marina.

Just the other night I watched him with Fay Donoway in a movie and the name slipped from my mind ☺️ it was a very good movie and Steve being Mr. Handsome❣️and Fay being Ms. Gorgeous back in 1968.. He belonged to Ventura Missionary Church in Ventura, CA the same church hubby and I belonged to 15 years after Steve had passed and the Pastor spoke passionately about Steve and having cancer..He is a healthy young man again with no pain living with Jesus..Thanks Marina..Hugs my friend❤️❤️

Did you see the new documentary about Steve that came out in 2018 called Steve McQueen, American Icon? It covered his whole life and was really a fantastic movie about him. They interviewed all of his former wives and told about all the movies he was in, and what went on behind the scenes, all the way up until his death. I loved this movie and the fact that he found peace in the last year of his life.

He was definitely rather gorgeous. Deanna that movie was terrific. Thanks Marina ☺️

He and my father were born the same year...my dad lived 37 years longer... Sherry

We cannot forget charismatic Steve McQueen, do you remember the movie The Magnificent Seven? ♥:))

Too cool to be forgotten, thanks for sharing this tidbit and a great picture of him. *U* Voronica~

And one of the original bad boys.