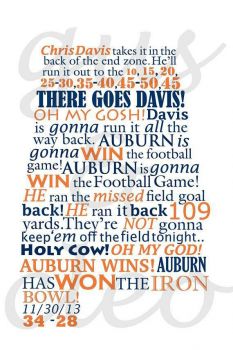 Your "Bama" daughter is fortunate that you folks are so forgiving! LOL
In my family I contend with about equal numbers of UF and FSU grads/fans, so lots of rivalry there! :-D
Fortunately my husband and I both went to UF, so at least the two of us are in agreement. :-)

You could be right, Pam! Three of my grandchildren and one of our daughters went to Auburn and my husband and I have always been Auburn fans so, yes, we follow college football enthusiastically! Our other daughter went to Alabama, but we have forgiven her!! LOL!!

Good morning, Dottie!
Okay - correction: SEC games are fun, but SEC games are not necessarily a "big deal", though they CAN be to a rabid fan, on a given game day! lol
I imagine it's that way most anywhere around the country, with various conferences, where college football is being followed enthusiastically. :-))

I hope it's a breather, too Haney.

Dottie, hopefully, a breather. AL State. We rose from #9 to # 6 in most polls. Washington dropped hard. Haney :-)

I agree, Pam, it's Always fun! Hope your Gators do well...except when they play Auburn! :D

War Eagle, Haney! Who do we play this week?

Dottie, just checking back in with a War Eagle! Haney :-)

Football Season in the SEC - always a big deal and always fun!! :-)))
Thanks for this great puzzle, Dottie, and I will herewith throw in a "Go Gators!"

So glad you like it, Sparklie Friend! Thank you...I think he is adorable, too! :)

WAR EAGLE Haney! Do you know when our first game will be played?

That's good news, Binkydo! Yes, they are sooo tiny...and precious! We will continue praying for them.

The twins are looking better and better every day. So tiny and precious.

Binkydo, how are those precious twins doing? I haven't been on FB today.

I forgot to tell you I saw them. I did comment on FB! They are SO precious! When I see a baby I want to hold it!!! Can I come to your house and hold one, or both, of those precious gifts of God?

DixieGal, did you see my new twins on FB? My last two grandchildren, born on YOUR birthday!

Might or might not... Anxious to see what happens with both teams before they get to the Iron Bowl.

And the little kitty might win one this year! Haha! We will see...

Since 1893, the Crimson Tide and Tigers have played 82 times. Alabama leads the series 45–36–1. The game has been played in four cities: Auburn, Birmingham, Montgomery, and Tuscaloosa.

Roll Tide Roll!!! :) It's going to be fun talking football on here this season. I hope most of the SEC teams do well (not much hope for some), but I love the Crimson Tide!