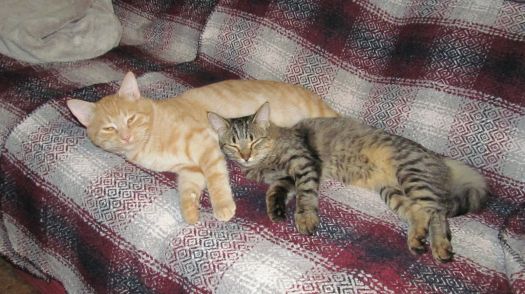 My dynamic duo
Created by DizzyDame7 Published 6 May 2019
Why this advertisement?

Loved your Tiny story! Reminds me of when Spook (my grey Persian) went missing. I was calling all over the neighborhood. The neighbor across the street called out "looking for someone" and called me over. There he was - up the world's tallest poplar tree with his nemesis (we used to call him Scruffy - big old white tom - feisty street cat that looked like he had a huge fur ball on his back - later learned that a neighbor had caught him and taken him in to the vets to see if they could remove the "lump" - turned out it was remnants of a "twin" growing on his shoulder so they left it in place) sitting on top of the garage looking up the poplar. Chased Scruffy away but Spook would not come down even when we shook the Temptations Treat bag. Took another 4 hours before he finally came down. LOL - Diz

clearly remember an incident with Tiny (my dear boy who passed away 3 years ago, he was 18 when he crossed over rainbow bridge, still so dearly missed. seems like only yesterday)
he used to be allowed out, but came home one night with a deep gash, so became an indoor cat immediately. he snuck out late one night. called and called, no sight of him. first thing in the morning started calling him again from the front patio. nothing. but noticed my neighbour laughing her head off. said that tiny was missing, she replied, look above your head. and sure enough there was tiny about two foot above my head on the roof. little tyke was enjoying himself and not making the slightest sound. he may have passed, but I still have so many wonderful memories of my dearest friend.
the little tyke came down from the roof, solely because he was hungry, and I guess wanted to be made a fuss of. which he was.

Well - Minx did get out late last summer and decided to stay out for 3 nights - I was at wits end and so was Figgy! I finally left the back door open and the door to the kitchen closed to keep the others inside. I went to check and managed to catch a glimpse of her sneaking into the basement. She and Figgy spat at each other for days and I was worried that things would never return to normal. Minx must have ahd a good scare because she clung to me for days afterward. In the end, they made peace and are now back together although the dynamics of our cat family have changed since I lost Patsy (looked just like Figgy) to congestive heart failure a few months ago - such a sad day!

just like my two dizzy, Figgy and Minx obviously get along so very well. and are contented , happy and so very cute. don't know what I would do if my two didn't get along, because I could never part with either, because like figgy and minx they are so dearly loved.