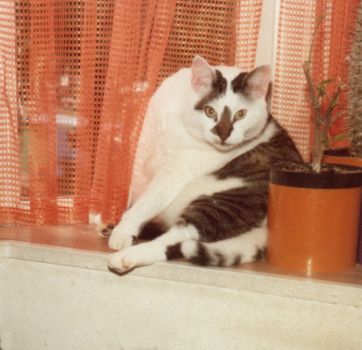 Long gone but will never be forgotten.
Lucky -short for 'Lucky Luke' how we originally named him- was our first adopted kitty, six weeks after we got married and got a place of our own..
He was about 11 months old when we rescued him from the shelter and gave him his forever home from 6. February 1973 until 3. August 1990. He was a huge cat and his size would scare people when they first met him, but he was such a friendly Giant and he loved to greet and welcome our visitors.
He did love all of his family....but his human daddy was his favourite!!! ♥☺♥
It were 17½ wonderful years he lived with us when we had to let him go to cross the Rainbow Bridge....
He will always be remembered with a big warm smile on our face♥
Created by Impie Published 3 August 2019

What a lovely story. You were lucky to find each other. xx

O yes, Nancy. If I could find the time I could write a book of all my kitties, how I loved them all, but I would then also have to own up that actually Goofie -by far- was the sweetest and most stable personallity of them all! :-) ♥♥

Wonderful memories, Impie. Thank you for sharing these stories. They are remarkable creatures. :-) ♥♥

Yeah, GG....perhaps it was because I combed him every day, which he didn't like, or at least the idea of combing he didn't like. I had his comb in a drawer and to get it out I had to be ever so sneaky because if he heard me open it he would hide. Whilst combing I had to hold him to stop him from getting away, but he did undergo it like a 'man' and even managed to secretely purr sometimes, but as soon as I said 'done' he happily made himself scares!!!LOL

Thank you, Betty....yes, he was a giant with golden almond shaped eyes...had a beautiful soft coat and his tail was lovely but in comparison to his big body rather small! ...and oh ....his ears became so pink, almost red and very hot when he was stressed (like going to the Vet's) ♥☺♥☺♥☺

Oh Impie! Such a wonderful boy! It is amazing how these wonderful beings "worm" their way into our lives, hearts, beings.
We "think" we are in charge but they "smile" that REALLY, The CAT is in charge!
Another WONDERFUL Boys, again.... ☺♥☺♥☺

What a riot, Impie! Isn't it amazing how animals interact with their "hoomins?" So funny...and I am sure you did NOTHING to deserve being ignored by Lucky. You have to wonder what goes on in a cat's mind!! They are so cute, though, and amazing!!

That's exactly right, nillie.....I'll never forget any of them, we always had such loveable kitties! ♥

Time is running fast...so many years moved past and Lucky is still well remembered! Thanks Impie♥♥♥

Thank you, lurdo. (we crossed comments). We were also the lucky ones to have had him in our lives for such a long time! After our last holiday to Spain in 1988 (he was then 16+) he got some health issues and we then decided not to go on (long) holidays anymore as long as he would be here! To tell you the truth I didn't mind it one bit, because I'd always miss my kitties more than anything whilst away on holidays!!!! ♥

You're welcome, Ella....Lucky was a softy at heart....he'd lie in front of André and when he'd hold his hand above him he'd pushed his head in the palm of his hand holding it with his front paws and then bunny kicked his wrist with his hind legs, hilarious....but he never used his nails!!!!....when I did that, he'd use his nails ...LOL

What an extraordinary story of love, Lucky was lucky when He became part of an amazing , loving and caring Family. Thank You for sharing your loving memories.

Thanks, Impie for sharing such a lovely picture and story of precious Lucky.

Thank you, Durham. I have so many good memories of Lucky....Until May 1975 he had us all to himself when our first son was born. I never gave him any reason to be jealous and I guess he wasn't really, but he just didn't like babies. Perhaps that's the reason he was in the shelter in the first place?! After their age of 4 he got along very well with the kids, he even went and sit in their laps.....with his 12 kilos of weight! LOL

What a wonderful story. Thanks for sharing it with us.
I'll bet Lucky will always be the one that brings in the memories of that time. Maybe your the lucky one!

I'm glad to share our friendly Giant with you, GG. I loved him to bits and I know he loved me back, but whenever something 'happened' or offended him....it was ME who got the blame for it....never my hubby LOL
He'd also be offended when we went on holiday. He was taken good care of by my dad who also loved him to bits and would go and sit with him for a while before he went home again! But after we'd got back home from holiday, Lucky would go stand under the table where I just couldn't reach him, but he'd went straight to his 'daddy' to brush and stroke his legs!!! He'd ignored me for sometimes 3 whole days!!!☺☺

Thank you, tisketsmum, Lucky was the third kitty boy in my life. I grew up with cats from the age of four! Our first cat "Beertje" (Little Bear) lived to be nearly 13 years old (I still know his dates...born on 12 August 1956 and crossed the Rainbow Bridge 5 July 1969 ( 50(!!!) years ago) and I still recall those dates!♥☺♥
After Beertje we had Dolf (short for Adolf). My oldest brother took him home from Germany (Lüneburger Heide) whilst serving the Army for his number in September 1969. Dolf was a small kitten of about 6 months old and my parents were initially against it as after Beertje they wouldn't want another kitty yet. My brother insisted that he'd take him with him when he got married the next year. Well, he did get married October 1970, but they had to get themselves a kitty from the shelter as my dad had gotten so attached he wouldn't want Dolf to go! Which on hind side was a great decision as they got a beautiful kitty from the shelter and brought it back again after 2 months...my S-i-L turned out to be allergic!!! Dolf happily lived on with us. My dad treated him like some Super King and Dolf could get away with 'murder' LOL . Dolf crossed the Rainbow Bridge 31 July 1985.

Lucky was a good name for your gentle giant as he was very lucky to have you and your husband adopt him. Love given and received for many years. Wonderful memory Impie; I wish we'd had cats live with us much sooner than we did as Tisket is our first and only. I just regret all the years we were missing out.

Aww, thanks for sharing Lucky's story with us. You have been blessed with some wonderful kitties over the years, and you have blessed THEM by giving them a forever home filled with love and care! Have a great day, Impie!