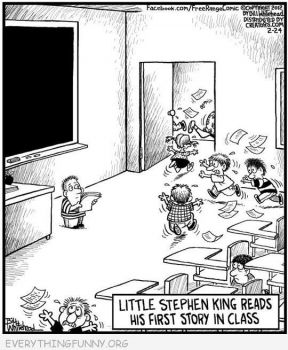 Yes I hate it when they change the film so much.

Cathy was so believable! As you say scary!

Yes, Misery was on again, last week. There are one or two of his books that have translated into good movies, but most of them I found to be disappointing and not just from lack of detail, too many changes. Cathy Bates is one scary lady !! (❀ᴗ❀)

Have you see 'Misery' Bub? It kept to the book almost exactly, it was a brilliant film and had you on the edge of your seat all the way through.

He's a great writer and I have read and re-read most of his books, but most of the movies produced did not live anywhere up to the quality of his writing. (❀ᴗ❀)

Carrie is an epistolary horror novel by American author Stephen King. It was his first published novel, released on April 5, 1974, with an approximate first print-run of 30,000 copies. Set primarily in the then-future year of 1979, it revolves around the eponymous Carrie White, an unpopular friendless misfit and bullied high-school girl who uses her newly discovered telekinetic powers to exact revenge on those who torment her. During the process, she causes one of the worst local disasters the town has ever had. King has commented that he finds the work to be "raw" and "with a surprising power to hurt and horrify." It is one of the most frequently banned books in United States schools. Much of the book uses newspaper clippings, magazine articles, letters, and excerpts from books to tell how Carrie destroyed the fictional town of Chamberlain, Maine while exacting revenge on her sadistic classmates and her own mother Margaret.
Several adaptations of Carrie have been released, including a 1976 feature film, a 1988 Broadway musical as well as a 2012 off-Broadway revival, a 1999 feature film sequel, a 2002 television film, and a 2013 feature film.
The book is dedicated to King's wife Tabitha: "This is for Tabby, who got me into it – and then bailed me out of it."

I do understand why the kids ran off!

a very interesting story, I must say. my son found it, i read it after he finished. no horrorstory, but in parts quite spooky

It's one of the few Stephen Kings that I haven't read. My favorite book, by far, was 'Misery'. Brilliant film too, it kept to the book almost exactly :)

I think I know this one. LOVE the cartoon.

Why didn’t anyone react when the king farted?


It was a noble gas.