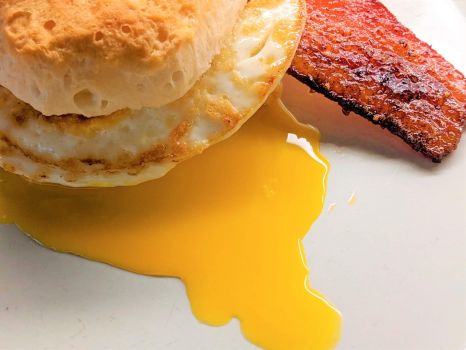 I don't know if this is the McDonald's or home-made.

Posted by someone with the wonderful -- or greasy -- name of DRBACONRUB.

Okay, @patsquire, you have me laughing and cringing.

I've generally heard that Hitch was an a-hole, but a brilliant one. I love his movies for the most part, as well as his anthology TV series and books. He anthologized some of the greatest thriller stories ever. But if I could go back in time, it would be to meet someone else. :-)

Hitchcock was a legendary practical joker, very creative and elaborate. He gave a dinner party in England at which every bit of food was dyed blue. He would find out his stars' phobias, such as spiders for instance, and during the filming he'd give that person an elaborately wrapped gift box full of spiders! Once he gave a luncheon party at a fashionable Hollywood patio restaurant. Beforehand he called central casting and requested an elderly woman with elegant, regal looks dressed in the finest Victorian style to attend his luncheon. She arrived early and he seated her at the head of the table and gave her her line. Whatever anyone asked her or said she replied, "I am with Mr. Hitchcock." in a voice dripping with haughty disdain.

Mel Brooks tells a great story about eating dinner with Hitchcock. They went out to the most "in" restaurant in L.A. one evening. Hitchcock called the maitre d' by name. Brooks ordered for dinner a salad, some fruit and water. Hitchcock, and Brooks was wide-eyed when he said this, ordered a steak, potatoes, salad, soup, etc., etc., etc. An enormous meal by Brooks's standards (or anybody else's).

He watched in wonder as Hitchcock methodically devoured everything in front of him. Hitchcock sat there for a minute and then called out, "André, do it again." You could see that his mind still boggled even telling it many years later.

Well, then, I am sorry for Master Hitchcock, but he left more eggs for the rest of us!

He seems definitely to have had an appetite for other items. I really haven't followed his life story.

Did you know that Alfred Hitchcock loathed eggs his whole life? He couldn't even look at them. When he was a little boy he asked and was given an explicit explanation of what the yolk is and what the white is for. He understood perfectly, and he was horrified! People EAT these? It turned into his #1 phobia. When he was making The Birds he asked a reporter, “Have you ever seen anything more revolting than an egg yolk breaking and spilling its yellow liquid?”

This definitely looks homemade. You and me both Fiona!!! :-)) dj

Man, if they just dumped it on the countertop, I would lick that up! Lol.