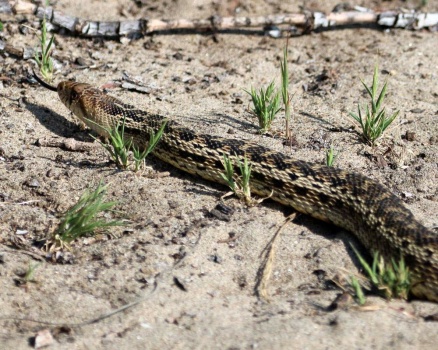 Created by Ginni2 Published 28 May 2022
Why this advertisement?

Jigidi University, canoekaw! I can't do much research on snakes, as they still freak me out, so thank you for the lesson.

He has a pretty design on his back and along his sides. I looked Gopher snakes up. They lay eggs in a communal nest with other Gopher snakes with 2 to 24 hatching and instantly they are independent. Interesting

Nothing bad would have happened, Ardy. I'm sure he would have gone around me if I hadn't gotten out of the way first.

I would just as soon never see a snake again, Patsy, but I don't think that's going to happen here in southern California, not if I keep walking trails. :-)

You're lucky, Jacki. My mother was terrified of snakes and taught me to be terrified too at a young age. It didn't help that people bullied me with snakes until I was about 22. I was camping with a girlfriend and two guys she knew. One of the guys and I were wading in the nearby river and he picked up a snake and started over to show me. I said "I don't like snakes." He said something about it only being something harmless and I picked up a rock and said again that I didn't like snakes. He put the snake down. I wouldn't have hurt the snake, but I would have done my best to brain the man. He wasn't bullying me, though, he just wanted to show me something he thought was interesting although he should have stopped as soon as I said I didn't like snakes the first time. When I started doing trail patrols 12 years ago, I would have nightmares if I saw a snake, even far away and one I knew at a glance was harmless. Last year I watched a rattler eat a rabbit for over an hour and didn't have any bad dreams about it. My friends were amazed that I was walking about four feet from the kingsnake to make sure no one bothered it. Someone killed a rattler at the other end of the trail a few months ago.

I don't mind handling non poisonous snakes that others are handling as well but I wouldn't like this one coming at me either. Glad nothing bad happened. Thanks, Ginni.

When I was growing up in Oklahoma I learned to avoid rattlesnakes and water moccasins. I longed to get close to non-poisonous snakes, but rarely saw one. I don't think I've ever seen a snake here in Alberta, but I know they're here, especially garter snakes in Calgary.

My grandmother taught me how to pick up garter snakes so I wouldn't damage their long delicate spines. While doing that she also explained how useful they are in vegetable and flower beds to eat the nasty bugs that eat the vegetables (or flowers). However my tender feelings for garter snakes and grass snakes do not extend to rattlers and suchlike.

That's a piece of dead ice plant, Jacki. Someone else saw this snake and called me over to the side trail. The @#$% snake turned and started slithering down the trail right toward me! They don't usually do that. I'm not as phobic about snakes as I was when I started doing trail patrol 12 years ago and I knew this wasn't a rattlesnake, but I still didn't want it coming toward me. If people are interested in this guy, I should post a shot of the kingsnake I saw a few weeks after this one. It was in the underpass below the freeway and I stayed close to it to warn others away. It wasn't the normal banded kingsnake, with alternate rings around its body, but had a long stripe horizontally. I thought it was a garter snake, but the man who ended up picking it up and carrying it to safety off the trail knew what it was. There was also a tiny rattlesnake, but I didn't get good photos of it. It did the proper snake thing and hurried off the trail and out of sight as fast as it could go.

Nice shot, Ginni. I can almost convince myself that there is a second, very skinny, snake gliding along at the very top of this photo.