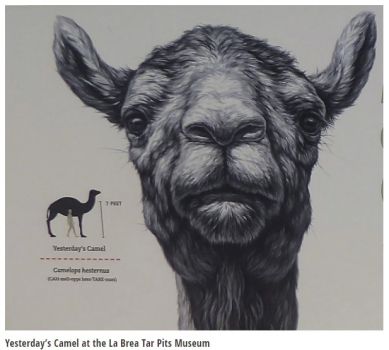 Created by Plumpossum Published 19 April 2020
Why this advertisement?

Except for longer hair and ears, it looks pretty much the same.

I'm glad everyone is having fun with this interesting camel!

I like how the illustration is rendered, nothing fancy or colorful but the face draws you in with that feel of sensitivity. It looks like something George Lucas would present to us in a bipedal form as another one of his "Star Wars" galactic species. ;-) Good puzzle fodder though, so thanks, Plum.

And here is a fact sheet from the San Diego Zoo:

That face would tell an interesting tale if it could,

Prehistoric Camels originated in North America, and some migrated to South America where they evolved into Guanacos and Vicuñas, whose domesticated descendants became Llamas and Alpacas. Others migrated across the Bering Straits land bridge and then across Asia, where they evolved into Bactrian Camels (2 humps) and Dromedary Camels (1 hump). The North American Camels became extict around the same time that early Horses became extinct in N.A. Nobody is sure why they both became extinct, but there are many theories.