The alpine Ibex living life on the edge... literally! 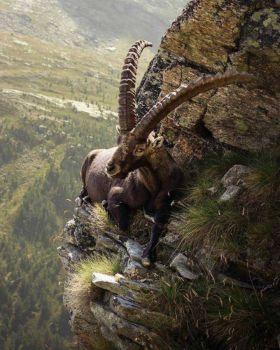 From Facebook page - Amazing Planet
Created by peachesgirl Published 24 October 2018
Why this advertisement?

Thanks for your research Sharon
Did not know about pointing to danger..

Here is a link for the Alpine Ibex. It doesn't say anything about a noise they may make to warn of predators. Instead, the stand on their hind legs and point their horns at the predator. They also run knowing other animals can't stand on rocky ledges. I imagine the baby just learns by observation what to do. The article is interesting. They can live for 20 years!

I wonder what they use to show danger? Most animals have screams or weird sounds. They must have something. I will look it up. ;-D

Ahah. I didn't know that about farm goats. You could be right about the Ibex, my friend. ;-D ❤️

It seems to me that Ibex like farm goats have no facial muscles, what so ever, to signal fear through expressions and as such their young never learn how dangerous their environmental escarpment actually is !!

It seems to me that anyone climbing cliffs like that may have a death wish! I don't like to watch videos like that. Being up high doesn't bother me. I have watched, I think on Animal Planet, goats climbing cliffs. They just must be very talented lol. I imagine one day you may hear of that climber.. that he has gone over the cliff face. Makes me sick to think of climbing like that! Thanks for your comments, Brian. I imagine most people feel the same way you do. Sharon from Mobile, Alabama ;-D

Thank you for the reply peachesgirl aka Sharon....I also find this very interesting.I myself get a bit dizzy just looking out of a window in a high rise.I do not know how these creatures do it.They seem to be right at home running around on cliff edges.It gives me the willies too just to look at pics or videos of them doing this just like Islay said in her comment.There is a video on youtube of a guy called Alex Honnold that climbs sheer rock faces in Yosemite using only his fingertips and toes only.
I can hardly bear to watch him do this climbing of sheer rock cliffs thousands of feet in the air using only his toes and fingertips.You would think it is impossible for him to do this but he does it all the time.This would give most people the willies,it certainly gives me the willies....Have a nice day all....Brian....Vancouver Canada...

Amazing picture Sharon. Gives me the willies just looking at him on the edge.

Hi bdmc. I would imagine they do fall. Some might not fall far but some might get killed from a bad fall. He surely has been around a long time. Odds are, he is still around. I just thought this was interesting. Sharon ;-D

He looks right at home on the edge of the cliff..Does anyone know if they fall once in a while? It seems likely that they would at least now and again.The rocks he is laying on look quite unstable as well..He has been around for a long time judging by the size of his horns. Hopefully he is around now and has not fallen since this pic was taken.