NO MATTER WHO IS PRESIDENT 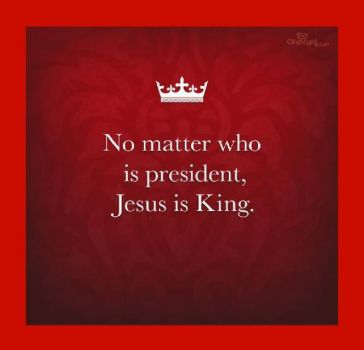 Created by KlubKittyKat Published 21 October 2012
Why this advertisement?

No I won't, because he doesn't exist! He is a consoling fantasy that helps people cope with the actual fact that this life is all we have, and will ever have. It's a sweet dream to believe that there is a reason for every horrible thing that happens in this world, like rape and incest and babies being shaken to death and killer hurricanes and earthquakes and wars and genocides and cancer and malaria, and that it will all even out and make complete sense eventually in the future blissful eternity (really, people, why would a merciful god inflict all of this on innocents, given that you believe he is omnipotent?), but it's just man's evolutionary mental ability to understand that he will not only live but die, and his clever but mistaken response of making up pipe-dreams to explain and soothe himself.

You will have to take that up with GOD!

I prefer a democracy to a kingdom.

Praise the Lord for that!

Amen!! I v ote for Jesus!! I would despair if I
didn't know we are in His hands.

amen also.. only jesus can straighten up that mess in d.c