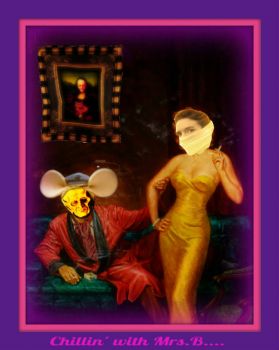 Today, I present to the public this charming image of 'A Bugosi night in'........
Sometimes, when my duties as an important head of state permit, Mrs.Bugosi and I enjoy a quiet
evening at home, where we ponder over questions relating to the ways of the world, and our place in
the scheme of things.......
Above us hangs the work of art known as 'The Mona Donis' which depicts the 16th.century trapeze artiste, Adonisette B.Bugosi, stroking her pussy, 'Tiddles'........This led us in our ponderings to ponder the question "Why does our cigarette smoke distort the painting?", and after pondering together for over five hours without discovering an answer, we decided to retire to bed.......In fact, Mrs. Bugosi had already been asleep for four hours.......
Created by lelabugosi Published 3 December 2013
Why this advertisement?

herepopcorn for all - just keep your mitts off of my chocolates

Of course you are a sex goddess in flimsy outfits and spiky heels, juneeeee...have a few more Christmas chocolates...and I promise, you won't even gain an ounce here...so all your outfits will still be labelled as dangerous weapons!

whaddya mean? this isn't real life? I am not a sex goddess in spiky heels with a note book and pencil. Well thanks a bunch that's completely ruined my Christmas............

Your imagery overwhelms me, gemmy! You must be a poet in real life.

Perhaps you would consider visiting Calgary, psquirt...where all your extraneous LITTLE bits and pieces would freeze and fall off immediately...and the rest of us could finally enjoy a Silent Night! :)))

I am overwhelmed by the Christmas spirit this year. I hope everyone who sees my new avatar (courtesy of Octomom, you know) will take my benevolent greeting in the spirit of joy and happiness with which it is intended! HAHAHAHAHAHAHAHAHAHAHAHA! ! ! ! !

All your pieces have certainly been well done, Juneee, not one too many!! They are a pleasure any time!! But it IS incredible to think about.....

interesting number. made me wonder how many pieces I have generated over the years, I reckon about 2,231,000 to be going on with. Makes me feel tired but happy that I have managed to find something so interesting to fill my days which otherwise would have overflowed with daytime TV and sudoku.

Hee-hee! Yup, that's me. Proud as punch. And to leap to the final total I solved my biggest puzzle EVER, a 494 piece behemoth that took me 3:22:22 to do. It's called Oranges in a Vintage Setting and was posted by ellasnana on November 21, 2013. It's a very entertaining, well composed still life.

Bugosilanders, I am pleased to announce that, through careful planning and puzzle selection, as of this moment I have officially assembled 234567 puzzle pieces! I'm not saying I'm obsessive-compulsive, but I do pay attention to these things. And just think, I'm only, and exactly 1,000,000 more pieces away from 1234567 ! ! ! ! !

IS there something magic with that picture?????

It's my New Year's Eve gig, darling Heidi-of-the-floppy-clocks. See you at the stroke of midnight. We'll see stars together.

When's your next gig there? I need to go back to see if I can remember this time.

A gentleman never kisses and tells. Neither do I.

BateMaster, I am shocked! Shocked!

I'm finally recovered from my night out at the Tiki Lounge and The Cavern. I seem to be suffering amnesia, though. I have no memory about what happened over the past day and a half. Did YOU see anything, Mr Squire?

If I was Mrs.B. I would be very upset over this ear-twitching business...how can she get undressed without a camera flashing....

You are indeed observant, Tom-minus-Poirot...........We have a security camera in the bookcase, and it was remotely operated by an infra-red sensor attached to my cap.....which was set off by the imperceptible twitching of my left ear..........

There is a mystery....no credit has been given to the photographer...who was in this steamy room taking candid shots...with a camera that must have been damaged from the heat...

Gauloises and Gitanes - I remember them well - strong like h....eeeh...lightning and fire

Ah, but in France there is no censorship, oui?

Oh...the picture's fine, psquirt...it's the "French" that seems to have slipped past the censors...

Ach! Oy! Gemmy! Your comment went RIGHT OVER MY HEAD!

Ahhhhhhhh, got my Jigidi All-Star STAR back! Whew!

And my STAR has disappeared! I guess it expired today. So for the BARGAIN PRICE of only $18 for a FULL YEAR I'm going to buy a new one.

My filter "ON" doesn't appear to be working...

I know you do Churchy, and I know you love it even better when I do more than SPEAK it.

Oh Patty-cakes, I love it when you speak French......You KNOW what it does to me!

...and after The Cavern closes, perhaps a little more serenading tete-a-tete?

all my presents to give people, they have now arrived so no pigeons involved.

wish my merry mailman would hurry up with my delivery, hope it isn't one of Lela's pigeons

Well, I'm off to the Tiki Lounge, and then The Cavern after the Tiki closes at 2.

Nope, no fire hose. But I do have a pressure washer. Will that do?

Does anyone have a fire hose?

Thank you for pointing me in the historical direction of this famous work of art...

'tis this one, which we have moved from the O.L.D.B.A.G........
http://www.jigidi.com/created.php?id=QYTKTPLZ
I believe she is a slightly distant, not-too-near, in a faraway way, relation of Adonisette.........

I'm trying to get past the heat in the foreground and concentrate on the artwork....the trapeze artiste seems to be very old so her days on the wire must have been over when the oil painting was painted with oil....is she related to our own motherly Adonisette?....

Dear LelaB, perhaps you and Mrs B should remove the art from your Boudoir for its protection. Cause you and Mrs B are smoking hot !!
Hubba Hubba!!

Of course, we could do a show together, but at different times, separately, at the same place........I would be performing my Merry Mailman Song........

You're welcome, you're welcome. I'm appearing in the Tiki Lounge all week. And in The Cavern all-night pub after the Tiki closes at 2:00am.

(Thank you also to the Sisters Darn for getting me the gig!)

Ohh, I thought it was a blues! I could almost hear the tune and the lonely guitar....

Rock n' roll medical advice on how to lower my blood pressure and my temperature!

Did you really think it was the cigarette smoke that wobbled the painting!?!? How about the heat rising from your body?? I think that would be the most likely thing that happened to it!! Now draw the drapes & get on with your chillin'!!
Thanks lela!! :))))
(time, 1:21)

Reeeeeally, psquirt...the lovely Mrs. B. was asleep for four of the five hours and YOU need hosing down...where's the pressure-washer???...and perhaps you could bring Roger along!

Those imponderables will getcha every time, Lela. Mrs. B is a wise woman. Sleep is frequently the answer.

Oh my...verily I am aghast at the heat emanating from this puzzle....and it surely is this heat and not cigarette smoke that has warped the painting....I am shocked that you would allow us to view this smokin' moment....I know it will soon be reported.....

Whew! Somebody hose me down! This puzzle is too stimulating by far! My mind is awhirl with thoughts of cosmic galaxy collisions, enormous steam locomotives pounding down the tracks toward tunnels, skyrockets bursting in the night sky! Yikes! Even my honeymoon comes to mind, and that was a LONG time ago!

Yes, there is - but it hangs in one of the guest bedrooms for unmarried ladies......As many ladies of a certain age have told us that its contemplation makes them feel 'relaxed' we decided the 'Organus Bluebottleus' (for that is what it is called) should be placed at their disposal............

What a lovely painting! Is there a companion one of Uncle Bluebottle playing his organ? They would make a perfect matched set........