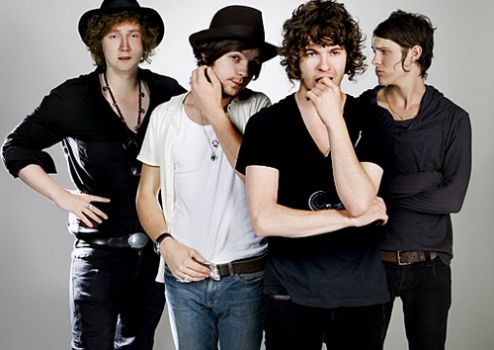 Created by squishy2 Published 8 June 2014
Why this advertisement?

I can't see anything sweet, Squish :-)

I know the song, meaning: I've heard it before, but I had no idea who song it.
Let alone I know how they looked like :-)

Well done once again TTK. And squishy, what a fabulous job you have done for the past two days, in lady c's absence. Take a bow. I tried my hardest on The Kooks, but they just never got out here to Oz. No matter, there's a huge thrill in the chase, and it certainly keeps us all on our toes. Cheers to all.

Love the video, Know the tune well. That's going to be stuck in my head all day.

I hope you enjoy the video, TTK. Even us old timers find gems in today's music occasionally.

You did a great job, thanks squishy.

Thanks again for joining me! You'll be pleased to hear that ladyc will be back tomorrow!

Happy Double Solve, TTK! Wow, squishy, this was a challenge!

I've never heard of them. Thanks MrD.

Wow!! TTK on another swooping win!! The Kooks are one of my favourite Indie bands.

The Kooks are a British rock band formed in Brighton, East Sussex, in 2004.[1] The band consists of Luke Pritchard (vocals/guitar), Hugh Harris (lead guitar/synth), Alexis Nunez (drums), and Peter Denton (bass guitar). The lineup of the band remained constant until the departure of Rafferty in 2008. Dan Logan served as a temporary replacement, until Peter Denton joined the band permanently in October 2008. Early in 2010, Pritchard announced the departure of drummer Paul Garred, due to a nerve problem in his arm. Late in the year, Garred rejoined for studio sessions, however Chris Prendergast played drums when the band played live. In 2012, the band was accompanied on drums by Alexis Nunez (from Golden Silvers), who eventually joined the band full-time.
Here’s one of my favourites.

Stirring it up again, MisterD?

if there were anymore they would spoil the broth Neville

MisterDon, you are tossing clues to and fro....... But I'm not getting the correct vibe, yet.

They are a bit more recent than Britpop, glgl.

I was thinking they were from the Britpop era. Hmm...

I thought I'd never heard them, and I don't recognise the name but I've moved in my own way to hear that song with 9 million hits on Youtube

Sorry Neville. Not The Vapors.

I'll try The Vapors. They had a song which was 'almost Vietnamese'.

Really? Specsavers are doing a 2 for 1 on hearing aids this week....

I thought they sounded almost Vietnamese

Well done, Neville - they are English - and they sound English too!

I'm none the wiser Squish

Sorry starlord, I'm so busy scratching my own fez, I do not have the time to scratch yours. My first impression was: "They sure look English".

One of my favourites, MisterD.

Not at first glance, Squish :-(
Neville, will you be so kind to scratch your fez for me?