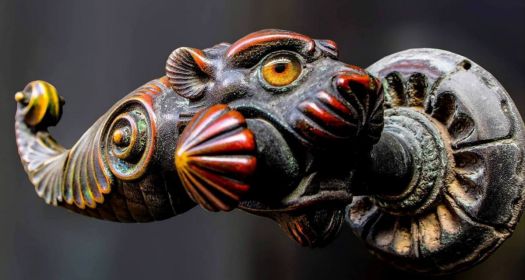 It didn't say!!! So irritating. I don't know why photographers are not willing to give a few details about "What/Where/When": it makes it so much more interesting. Thank you, spencersmom.

I have to post a puzzle of my father with this car (but, alas, it's only a small b&w photograph that will not scan all that well). No idea who he sold it to. I do wish he had kept it; we had plenty of room (outbuildings, etc.) at out family home. : -((

(My Biscotto avatar, in case anyone is wondering, is a 1933 Fiat Balilla 508S Mille Miglia Spyder. My father had one before I was born and it was already vintage then.)

Saw and followed it closely!!!

Did you see the altercation on the Satyr Door Knocker puzzle, Jerry? Hilarious. Go have a look.

Patricia, your posts provide the best entertainment of all media!!! Wouldn't it be grand to have the regulars sit around a table and carry on madly and badly????

I'm loathe to jump in the middle of this brouhaha..... but feel I must..... I find this door handle beyond scary and would never want to see what lies beyond it! :o)

No, you may well appreciate the deep, but you are obviously not capable of deep appreciation......

And you don't think I'm capable of deep appreciation?

And I'll be President! Thanks, jerry.

I'll say it again, Bug, you can have the door knocker. It's all yours.
And since I'm a fish I'll use the door handle on our front door.
And then their will be PEACE.

I'm keeping my mouth shut...
Wish Clive would jump in the middle of this ruckus ..... but then again, I don't
think he would survive...

The incredible detail that is invested on as mundane an item as a door handle is amazing. What a great sea creature/carnivore hybrid...right down to the glass eye(s). None but the stout-hearted dare enter! Hmmmm...to heck with the upcoming debate she or he who can successfully and unassisted flex this handle becomes President!!!

Yes, you attempted/pretended to purloin the door knocker, which was promised to ME!
And then you called me names!

But SHE started it!

What the hell have I started!!!... LOL
There'll me no more knockers and door handles for either of you from now on!

That is a very North Korean kind of response, mosquito.

Phew...
Now for the Clinton/Trump scuffle...

Aphid, a truce! You can have the knocker. It's still with its owner. I'll take the fish handle.

Not if you get there first!!!

Ohhhhhh! I'm sure that fishy person will try to steal this!

Wow, that IS a cool one!