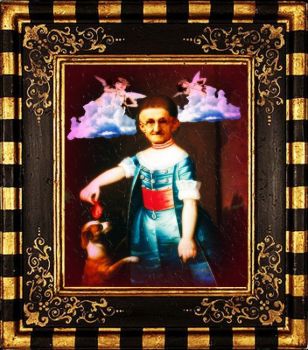 Today, we pay another visit to the Oils, Lithographs, & Drawings section of the Bugosi Art Gallery (O.L.D.B.A.G.), this time to view the only known portrait of the beautiful damsel known as 'Mad' Mathilda Bugosi, seen here performing her party piece - 'balancing a dead fish on the head of a dog'.......
It is recorded that Mathilda was renowned for her gift of reviving dead fish, simply by placing them
on the head of her pet dog, 'Hookie'........During the great Bonga-Bonga Fish Shortage of 1797, thousands of people flocked to her with their dead fish, and it was common to hear the phrase "Put da fishie on da hookie" to raise the spirits in times of despair......
Mathilda went on to open the first fish 'n chip shoppe in Bonga-Bonga - it also marked the first
appearance of the sign "No dogs allowed" as that would have been bad for business,,,,,,
She requested to be buried at sea, and now rests in the Pond Of Happiness at the Bugosi National
Park.......
Created by lelabugosi Published 7 November 2013

I bet psquirt could tell us of a number of people who have "slept with the fishes" though.

Devil-thingy.........Bonga-Bongan scientists are currently working on the theory of the existence of a "Giant pond in the sky" i.e. fish heaven, and one or two of them - well, two of them (uncle Adonis and unclebluebottle) actually place it in the constellation pisces........of course, we may never really know, as fish don't talk......

So, dogs can bring fishes back from the dead? Do they tell of tales of long toilet flushing tunnels with bright lights at the end? No, of course not. They don't remember that long. The world will never know of the fish heaven.

the fox that killed the chickens on our goat field came for one a night, maybe he was the one with the brain. We didn't own the chickens and the man who did own them never locked them up properly.

Foxes, wolves, members of the marten family and others go crazy - it's something in their instincts, but cats are different, they ENJOY it! You are SO right Pat!! We had two dogs, one of them a great-grand child from and Alaskan wolf - they killed 28 chickens during a night. They didn't eat ANY of them, but piled them neatly and looked as if they had done us a MAJOR favour!!

And a fox in a henhouse will kill 50 chickens and then carry one off to eat.

Who was the mouse, lela? Topo Gigio or Mickey?

Silly mouse to take a nap there!! I'm sure it needed some catastrophe aid!! Guess nobody thought about that.....

Mice are extremely dangerous.......My great-great-uncle Peregrine Bugosi tripped over a mouse, fell down the stairs, and broke his neck........I don't know if the mouse got any pleasure from that.......

Very wise observation, Hanne. People are the only animal that kills for the fun of it, except animals that people train to kill for sport. No animal is more dangerous than man.

I agree totally. There are a lot of animals that shouldn't be made pets, because they don't understand it and we don't understand them. But since I touched a snake and found out how soft and warm it was I've not been afraid of them and when I see some in nature I feel a bit honoured because they are so shy and really don't want YOU!! But P-squire, I think that if I had them around as you had I would do what you did.

June - I don't think it's a fair question, they were here before us and besides what's to like with US and actually what are WE for??

100% agree S.H.. Snakes are great doing what they were "created" to do. I'm not at all afraid of them but I agree keeping them as pets is not a good idea. Great job and thanks for working for the betterment of the horses Heidi!

Snakes are phenomenal rodent control, but I don't think they should be kept as pets in small cages. These people were driving around with a 9 to 10 ft. long boa constrictor loose in their pickup truck. And they literally stunk of snake.

Dontcha go tossin' no snake in my direction! Ugh! Yuck! The only good snake is a dead snake, at least while I'm watchin' th'action. Found 8 snakes in my yard during my 7 years in south Florida. Mowed one into a dozen wiggly pieces, shot 6 with BB guns, and one I missed and he got away. But he fled to the other side of the canal, so I'm hoping he never came back. Never saw him again, anyway. DON'T LIKE SNAKES!

what do you want?

Back from my latest trip to rescue 2 horses from some snake worshippers. Or something like that. We spent 26 hours on the road with my motor home and a horse trailer. Mission accomplished!

With all that steam jetting out from Mathilda's ears, no wonder this work is considered to be hot property, perhaps we should be questioning M'sieur PSquash's alibi a little more n'est-ce pas?

When I lived in Trinidad, Colorado in 1965-66 we had a pretty little white church on the other end of our block. The 4-Square Gospel Church, Holy Rollers. Those folks rocked the whole neighborhood through their open windows, Sundays and one evening a week. They may have had access to the same kind of communion wafers, because when they got to clapping and singing it was glorious, purely glorious.

OK well don't invite ChurchLady and it might just be a two-day event. She can go compare notes with the Sista I think they will have a lot in common

Lela ~ This is made especially for you:

Noon eh, time for another wafer and a dash of the taddywine to wash it down...........I like the Baptist version of things best where the Gawldarns and I can get a good sing song going

HALLELUJAH!!! Past the wafers Sister Ineeda. Can I get an amen!!!

Of course squirt. I knew you were working FOR Eli Lilly. I just wasn't sure if you were sure who you were REALLY working for. Spy work can be VERY complicated. I myself was actually a double spy working FOR Eli Lilly trying to uncover who the REAL spy was. All I can say is Sister Ineeda was having TROUBLE keeping the congregation AWAKE during midnight mass so she EMPLOYED an UNKNOWN operative to steal the necessary INGREDIENTS from the plant in order to turn the COMMUNION wafers into amphetamines. We KNEW this had been accomplished when we noticed the SERVICES were still going strong almost till noon.

Toes, lelabug? No. Nose. They stomped on my toes, or tootsies, too.

Right Hotpants, that's why I do undercover work FOR them, not AGAINST them. You must have been crazy, trying to take them on. Eli Lilly RULES! Of course, you called yourself an "industrial spy" so you may only have been trying to steal formulas or manufacturing methods. Not an "environmentalist spy" who might stand every chance of disappearing into a vat of (??something??) and eventually coming out in thousands of doses of laxative! Eeeeewwwwww!

Psquirt I'm certainly glad that you remain safe to this point. I'm not really sure why....oh yeah.....please stay safe until you can remember if it was Com Truise or Tron Javolta who was carrying the 'goods'........Just wondering.

Well, it would seem this popular phrase, turned into song, went from Bonga-Bonga to the whole world!......

Since I reed ,""put da fishie on da hookie"" , I cannot stop singing ! It is not hindu at all , this singing twin pair has just stolen it .It is Irish with a Little bit Flemish from a fishermann ! I note here the notes , so we can sing alltogether . The rythm is noted ---for long and . for short

But grooooaaaannnnnnnn, they beat me up something awful, stomped on my hands so I can barely move my fingers. Had to crawl all night just to get into the woods where they couldn't find me. Don't know how I'm going to solve puzzles. Groan.

Is this your doggie, Lela, or does he just have the same complaint that you do?........

thousands-of-cakes.....ummm....yes....probably......possibly.....could be.......
raincoat-infusion......hotpants has remembered correctly, it was indeed that very melodical melody 'Put Da Vishnu On Da Hookah' sung by Amos 'n Andy, the famous half-cousin-twins from Calcutta......

Wasn't "Put da fishie on da hookie" made into song? Sounds so familiar...if not, it should be...such a cute phrase. I like it :^)

Hookie retired, and went to live out her old age in the Bugosi Aquarium of Tropical Sardines (B.A.T.S.)......

Mr. J.C. if Mad Mathilda breaks the surface again we'll put her in the 'New And Improved' dunking chair on the 'reinforced' north bank of the tadpole pond! What ever happened to 'Hookie'?

You are right, Mr.Christmas-Carroll.......the mysterious mystery is solved!......
Hanne-with-pipe.......I think the safest thing is to throw a thousand red herrings on top of her......that should also please her spirit......

Try with a red herring - might be great fun, really!!

I guess she got her dog to revive stinking old fish so that when she fried them they were nice and fresh, we have a similar fish shop in out village only their dog doesn't seem to be doing it right

And about cats? Were they allowed into fish'n chip shoppe? Such great fun....

Bonga-Bonga has such bizarre traditions...first they use that poor dog to revive all their dead fish and then 'Mad' Mathilda takes the fish to the fish 'n chip shoppe and kills them....

This picture is PROOF POSITIVE that inbreeding has been practiced among the Bugosi's since time immemorial! Or at least for the past several centuries. Even Kentucky and West Virginia haven't practiced inbreeding that long.