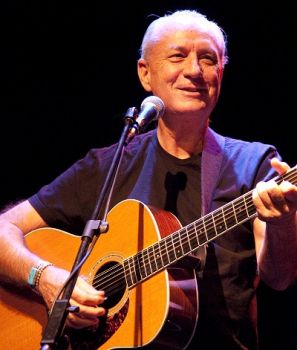 Thanks for the blast from the past! I admit that I did not recognize him. I was not aware that he was still performing.

Thank you all for joining me this morning! Hope to see you all again tomorrow at around 8am UK time!!

I've put links to a couple of Monkees songs on the Monkees jigsaw, but the one on here proves he's still got it! A friend of mine went to see him in concert last year (?) and said he was brilliant.

Full marks to MisterDon too, squishy, who put me on track with the clue about his mother. Would never have got there without it, MrD.

Congratulations Neville!! It is Michael Nesmith!! Woo hoo. I'll post a jigsaw of The Monkees in a minute...

Robert Michael Nesmith (born December 30, 1942) is an American musician, songwriter, actor, producer, novelist, businessman, and philanthropist, best known as a member of the pop rock band The Monkees and co-star of the TV series The Monkees (1966–1968). Nesmith is a songwriter, including "Different Drum" (sung by Linda Ronstadt with the Stone Poneys), and executive producer of the cult filmRepo Man (1984). In 1981, Nesmith won the first Grammy Award given for Video of the Year for his hour-long television show, Elephant Parts.

I Tippexed out Michael Nesmith, but I think I'd better ink him back in. Sure doesn't look like him!

Yes she was - and millions of secretaries across the world used to thank her when they made a mistake on the typewriter.

and his mother was an inventor

His band was one of my favourites back in the 60's - We've evolved a bit since then.

Yes, I'm old enough to remember him in his prime

It must be your age, Mister Don.

I know who it is and I still don't recognise him :)

Morning all! A bit more tricky than Mick and Keith?

Good morning again, squishy, and all DYR fans. I haven't got a clue, so will start with a guess - James Taylor, of 'You've Got A Friend' fame.