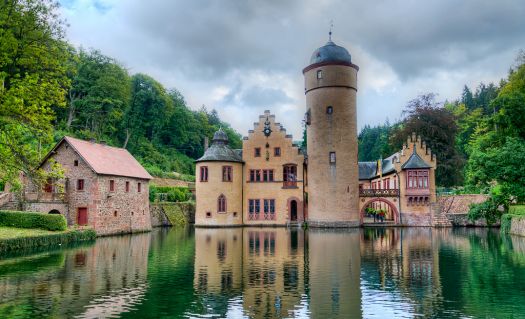 Mespelbrunn Castle is a medieval moated castle on the territory of the town of Mespelbrunn, between Frankfurt and Würzburg, built in a remote tributary valley of the Elsava valley, within the Spessart forest. One of the most visited water castles in Germany, it is frequently featured in tourist books.
The first precursor of Mespelbrunn Castle was a simple house. The owner was Hamann Echter, vizedom of Aschaffenburg, a title which means that he was the representative of the ruler the prince elector archbishop of Mainz Johann II of Nassau at the castle and town of Aschaffenburg. On May 1, 1412, Johann gave the site, a forest clearing next to a lake, to Echter, a knight, who constructed a house without fortifications. It was a reward for Echter's services against the Czechs. The Echter family originates from the Odenwald region. Their name presumably means "der die Acht vollstreckt", the executor of the ostracism. In the 15th century the Spessart was a wild and unexploited virgin forest, used for hideout by bandits and Hussites, who despoiled the regions nearby. Therefore in 1427 Hamann Echter, the son of the first owner, began to rebuild his father's house to a fortified castle with walls, towers, and a moat using the nearby lake.
Only the Bergfried, the round tower, remains from the 15th century. The following generations changed the defense structures to a typical manor-house, mainly built in the Renaissance style. Today's fundamental appearance is the result of reconstruction done between 1551 and 1569 by Peter Echter of Mespelbrunn and his wife, Gertrud of Adelsheim.

In 1648, the last member of the family, Maria Ottilia, Echterin of Mespelbrunn, married Philipp Ludwig of Ingelheim, member of a family of barons, later made counts of Ingelheim. By permission of the emperor, the name of the Echter family was preserved, because they were allowed to merge their names to Counts of Ingelheim called Echter von und zu Mespelbrunn.

The castle is now missing fortifications, but its remote location saved Mespelbrunn Castle from destruction by warfare.
The main building of Mespelbrunn Castle is built on an almost square base on the eastern side of a lake. On the whole northern, western and southern side, the court is surrounded by two storied houses. On the northeastern and southwestern corner, towers of similar height are added to the houses. These are decorated with stepped gables on the western side. The main entrance is on the left side of the southern building. On the western side, the court is limited by two framed transits to the water and the main tower in center, which surmounts the castle.

In the 1930s, economic pressures forced the Ingelheim family to open the site to the public. Today Mespelbrunn Castle is owned by the family of the counts of Ingelheim, who live in the southern wing of the castle, having moved out of the main rooms.

In 1957 Mespelbrunn Castle was one of the locations of the German film 'Das Wirtshaus im Spessart' (The Spessart Inn, 1958), based on a fairy tale by Wilhelm Hauff.
Created by ladywil Published 6 January 2016
Why this advertisement?