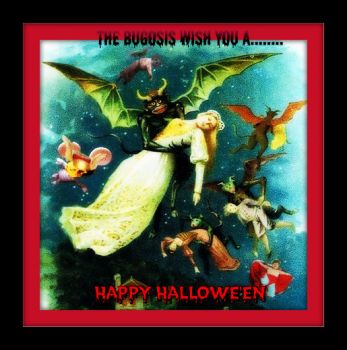 This is what to look out for tomorrow night......when the Bugosis take to the air, at a cemetery NEAR YOU!!......
Created by lelabugosi Published 30 October 2013
Why this advertisement?

He clapped the glass to his sightless eye and "I'm damned if I see it!" he cried
Admirals All by Henry Newbolt

Lord Nelson had very much success doing things like that!!

Sis, it's time you stopped closing the wrong eye when you are shooting pests

Drat...the sure-shots are still all over at Wisteria Lane watching for Roger...and now I find out there was SLIME at the party...who let HIM in??? What was he disguised as? (Dogdaze...sniff 'im out!) If we'd had a few of the crack shots at the party we could have got not only Roger but psquirt, too. Double drat!

Damn it to hell I think I missed.

Right. There can be only one SLOGranny! You were right to stay in shelter while the storm raged. Heck, on your broom you might have been blown to who-knows-where, New York, Chicago, L.A., San Antonio! Pocatello, Peoria, Pittsburgh, Portland! Lancaster, Louisville, Lackawanna, Lansing! (.......somebody....please....stop....me...........)

Broom! Why didn't I think of a broom?

Unfortunately, we had a major storm hit, with high winds, and it wouldn't have been safe out there on my broom. Besides, I wouldn't want to be mistaken for S.L.O.G.

Actually, Junee, it was Dwight D. Eisenhower's experiences in Europe that led directly to the U.S. Interstate Highway System. He became familiar with the difficult old roads, which were very similar to our roads back in the 1930s, and he also saw the wonderful German Autobahn. After he became president in the 1950s he pushed the concept of a national highway system, and helped push through the laws creating it. It is formally known as the National Defense Highway System, because it has a strategic purpose too. It is designed to enable fast transport of American Army forces to all parts of the country in case of an invasion by a foreign power!

Yes Junee, anything around 2 hours or less is considered an easy hop in the States. And in our case it's less than three miles from my house to the Interstate Highway on this end, and less than two miles on her end. We're lucky to live that close to such great thoroughfares!

I guess that passes for close in America

YAWN................just got home from my daughter's birthday party, 115 miles from here, an hour and three-quarters drive. Baked her a cake with orange icing and candy corn decorations! Took it up this afternoon. It is SUCH a delight having her living so close, we can actually do day-trip visits!

Just to recollect:
Yes, we'll bring the golden people.
No, p-squire, you can't but Wohn Jayne could and he's the only one to perform that stunt - and of course the nuns!
Heidi, why not use a silver bullet? We really don't know WHAT K-boy is, do we??
Why do you need me gemmie? You seem to do it all SO well!!!
Those tarts sound impressing really - of course we're coming - on our brooms!!
Use your oldest broom, Heidi!!
With or without guns? Do we leave it to the "tarts" or what??
Happy Halloween to all of you!! Master Henry too!!

That sounds like the party of the year! I don't know if I can get there by collie propelled dogsled, though. I don't think they can swim the entire Atlantic Ocean in just a couple of hours.

I'll be there! I'll bring chocolates!

I am sure the nuns will be able to give excellent tips on pumpkin jam tarts - perfect fare for the season... I hope they will bring some to the party...

Good idea gemmy. Nuns dressed as tarts. I like it! I'll be there for THAT party! Do you think Julie Andrews would step in and sing "The Hills Are Alive With Bump-And-Grind Music" ? ? ? Then we could ask Galwdarn for some tarting-up hints (although maybe nuns secretly know all about that kind of thing).

yes the cemetery is just over the road but tonight there is to be a party in the ruined mill in our back yard. It is hosted by my granddaughter, with her father within calling distance in case things go according to plan wooooooooooooooo!!! If we all get together and crash the party those pesky kids will just have to grin and bear it. Hamburgers will be served to the hungry at midnight

Could this be the reason for Master Henry's sudden grounding?

Now, now, Heidi...K-boy is a very simple boy and needs our understanding...doesn't he have sad, puppy-dog eyes...like collies? He really needs your help (and besides, we may be able to use his innocence to draw Roger out from his hidey-hole!)

Great news about the ammo, Coach! Do you think we should leave the nuns in their habits or ask them to dress as tarts for Halloween...that Slime Bucket might bolt from his bolt hole with the sight of a shapely thigh! And then we let him have it...with all barrels.

Yes, Heidi-of-the-droopy-watches, you may shoot Kaleidoboy. And please do. And please don't used the salt-pellet ammo. Please use buckshot. And please DO IT NOW, BEFORE HE GETS OUT OF RANGE!

double-batter......hoping to see you both tomorrow...........
precious-pebble......yes, now I understand.......However the nuns with guns are loyal to the Bugosis, and will not support your REVOLUTIONARY endeavours, whether it means backing up your fronts, or fronting down your backs!.........

Is that a Bugosi in blackface holding the blonde-haired maiden? A BUGOSI IN BLACKFACE? BLACKFACE!!! How dare you! Even Prince What's-his-name over there in England got in big trouble for BLACKFACE! OY! OY! OY!

Does not Mrs. Bugosi call you her Best Beloved, BB, lela?

The shot gun will only be for infiltrators bent on hell and mayhem but disguised as Bugosis...and of course, Roger the Slime Bucket! And G.A.S. is NOT a "rebel clan"...we are simply a group of Raging Grannies seeking frontier justice on the frontiers of Wisteria Street in front of Roger's bolt hole! I hope a few of the nuns with guns have received their salt pellets from Coach and will be able to back up our fronts!

My the naughties are out tonight and so it must be as this is Mischief Night. I think I shall also bring a ruler for the Sistah and darning gals. Have Ghoul Time tomorrow!

Hanne & Bent will you be bring the golden people with you?

For an omelet Heidi? How wonderful! I'd like cheese on mine please.

I have a great pirate costume, but I lent it to a friend.

Now THAT sounds like a fun way to spend Hallowe'en night... shooting flying creeps, boogeymen and Bugosis out of the air!!! I'm sending in my RSVP immediately. I'll bring a few munchies for us, and maybe some hot beverages to lure in the ghoulies.

I'll bring a dozen eggs, too, for you-know-what.

Does anyone have a pirate costume I can borrow?

Sadly one of us sister sisters must remain behind to pass out treats. Master Henry be sure and stop by for caramel apples and popcorn balls. Will you be dressing as the man in the moon this year?

Please, I implore all of you to be safe and kind to one another on Halloween. This is one of the most sacred nights of the year. We must all remain calm, peaceful and ... if anyone eggs the convent this year God have mercy on you, for the nuns with guns will blow your asses away. Have a blessed evening all.

Yes, Gawl-of-the-darn-back-from-the-undead........I believe this years party is being hosted by Juneee, as she lives right next to a cemetery......I'm sure your services will be needed!......

Happy Hallowe'en to one and all :))

Ohhhh, isn't it AWFULLY exciting? - imagine to be haunted by a through many years dead and then shot Bugosi??? - is it really possible to shoot at dead person?? Yes, Gawldarn, we ought to make a party to discuss things like that seriously......

Is there a Halloween party tomorrow night? I haven't heard a word about one. I would be more than willing to do a guest spot if called upon.

We'll be driving past a veeery large cemetery tomorrow night on our way to dinner (BB's birthday)...guess I better pack a shotgun just in case!

I will certainly keep a watch for them. If seen near my house, I will valiantly attempt to revive the fainted persons with some lovely hot spiced tadpole wine. My cat will take care of the flying creatures.

And a VERY Happy Hallowe'en to all of you!

But I'm confused. I thought every day was Hallowe'en in Bonga-Bonga.

Happy Halloween to all Bugosis and their friends. The cemetery is just outside my window