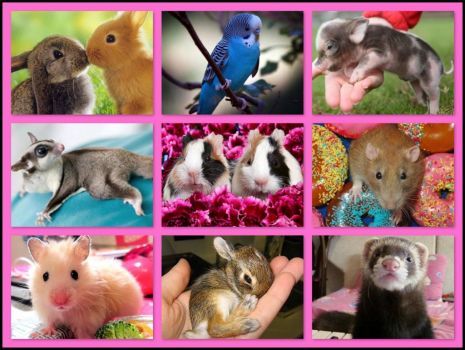 Created by JiggyBelle Published 5 November 2012
Why this advertisement?

Well, I/we haven't had a sugar glider, piglet, ferret or a rat as a pet but yes to the rest plus gerbils, turtles, snake (she was a summer visitor...a story to that) and various "rescued" birds which, for the most part, were able to rehabilitate to the "wild". Not so the mourning dove...he imprinted on me and stayed as a family member. I wasn't sure about rats until my daughter said "yes" to rat-sitting my nephew's little rat when he and his family went on vacation. Since my daughter had bought him the rat, she couldn't say no. She had the rat's cage in her room, on top of the plastic food container, and promised me that I wouldn't have to deal with it. One day, I couldn't find Meara. Oh no...my daughter left her bedroom door open! Meara was standing, front paws balanced on top of the bin, with her nose pressed against the cage. OH NO...the rat was going to bite off my dog's nose! Except that that wasn't the story at all...Sylvie had her little rat paws wrapped around Meara's nose and was kissing her affectionately. They had bonded! Needless to say, she won me over and it wasn't long before I was cuddling her myself.

Jim - I have thought that many times. Maggie sometimes just stares at me and I know she is trying to get me to do something. She pretty much has a trained, but not completely! :D

Animals are much smarter and valuasble as a companion than many people give them credit for. Wouldn't it be neat to know what they're thinking. Great puzzle Jan.

I wish I could find the photo, but in my first marriage, we were all dressed and ready to go to the wedding and my brother (age about 8) convinced a couple of the Bridesmaids to hold the rat. It was a great photo and still makes me smile.

Rats are very clever, one of my pupils had one and brought it to school sometimes. It just sat around his neck and in the breaks he played with it. Everybody loved it!!

Francine........Maggie is absolutely the best dog in the world. She was cute as a puppy and has developed into the most delightful companion you can imagine. We are so lucky! She says, "Thank You!"

Cute one. Thanks Jan. But I'm absolutely in love with your pup avatar.

A bouquet of sweeties!

Hanne - you have had quite a menagerie! I had guinea pigs for quite a while and rats for a couple of years. They are both interesting little creatures!

Thank you so much, Pat!

Love this puzzle and all the babies thanks Jan

I've had just some hamsters and mice, small Japanese Dance Mice and common white ones. I liked the hamsters most, especially one of them that was extremely friendly. I've also had a huuuuge guinea pig. Some small parrots and a big one too but unfortunately just for half a year. He was the most charming bird I've ever met. Thanks so very much Jan, they are very, very cute!!

As long as you don't have to clean up after them. Have you ever seen a hamster in a hamster ball? Whoa!

Hi Mimi. I knew a gal once who had 2 sugar gliders. (middle row left) and I always thought that was strange.
When I was teaching school, we had guinea pigs and rats in class!

Baby anything is so sweet, even a mouse in the donuts! Thanks, Jan.

Adorable! Each one is a joy, thanks!