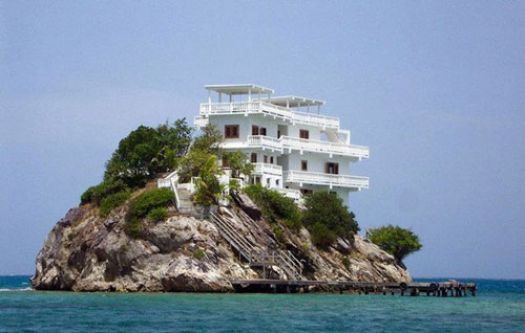 @indianacerta
The pungi (Hindi: पुंगी), also called the been (बीन) and murli, is a wind instrument played by snake charmers in the Indian subcontinent. The instrument consists of a mouth-blown air reservoir made from a gourd, which channels air into two reedpipes. The pungi is played with no pauses, with the player employing circular breathing. The pungi originated in India and is still played by snake charmers in street performances

Looks like it's been developed a bit since that picture was taken. Saw some speculation on where it was and who owned it....speculate no further....you can actually rent a room there!

September 12, 2017 It says I'm the 209,246th solver. Unbelievable! Can't imagine carrying EVERYTHING up all those stairs! Food, water, etc. Not to mention all the building and furnishing materials!

I WAS VERY HAPPY DOING PUZZLE WITH JIGSAW, BUT KNOW I CAN NOT GET IN THEY SAY I NEED A PUNGI, WHAT IT IS ALL ABAUT PLEASE HELP ME

Well, we are on the same boat...but am trying to make one of my post reAch as far as it could, will see.

Lunie, most people think it's all fake and I think they're right..And I still hate the place,like a wart on a beautiful face.

Hi Andie! I see you got,in here too! Am the 182,026th solver. Winder if one of our posts can reach this number.

It's the most hideous building you can think of on such a gorgeous place.No wonder someone as stupid as a movie star would get the idea of building THAT right in the middle of a lovely island.Shameful.

This house is in the Bay Islands of Honduras. If I recall correctly it was biult by either Julio Iglesias, Christopher Lambert or some other movie star.

No way, would I stay in that house, if it were real,and where else
on the 'island' would you even be able to stay. This has got to be
photoshopped. One strong hurricane wind would take it out, this
puzzle has been on jigidi since 2009, it pops up on the screen of
members somehow, I didn't ask for it, and I have seen it twice
'accidentally', that is the answer to the number of solves, after all
it is a small puzzle and it must have shown up for a reason, one
might think, so, okay, I will solve it, one might say. Speaking for
myself, I haven't solved it. It gives for good commentary, though.

Where is this place?. I'd like to visit there for sure.

What a great hideaway. This puzzle is so popular because everyone is thinking I would like to stay on this island. A place to call your own, quiet and peaceful.

do ya think FedEx delivers? what happens should the generators fail? other than that & a few things we take for granted. . . it's a great hide away.

Can one change the cut or the number of pieces?

Are you going to answer the question....why can't these puzzles be saved?????