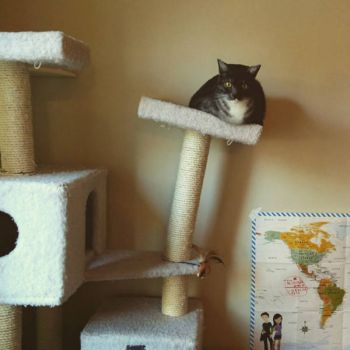 Might have happened as he was going down...when it was too late...Sherry :)))

If he was smart he's have sat on the higher side of that pedestal. Longer way to fall but lessens the possibility of it falling. Not in a cat's brain to think of that though. :)

Those little kitty eyes are five seconds away from standing out on stalks. Oops, don't think I can look any longer, just in case. ☺☺☺

Once it collapses they might get off their dead asses and do something about it. :)

Does look home made so quite possibly, Fredde. :)

Maybe it was made that way. LOL!

It's probably been like that for awhile and the human has had lots of time to fix it and hasn't done it. Might as well take pictures I guess. :)

again, I think I would get him off the narrow perch rather than take the picture...I know then we wouldn't have anything to talk about, but now you're going to have a broken perch and the cat may get hurt...just saying...Sherry

You are both welcome, Deanna and PD. :)

This cat is a slight bit pudgy so hope he can move fast enough when the tower tips. :)

This is a series, right? Cats in jeopardy on cat towers. At least this one isn't asleep.