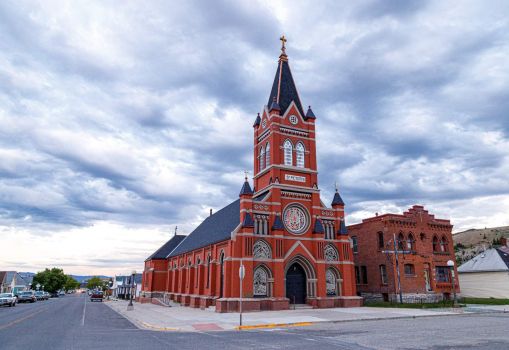 After yesterday's response to the history I shared about a historic cabin, I am a little reluctant to share more history. Here it is anyway. I drove by this church this summer during a brief visit to Anaconda, Montana. The church was called, St. Peter's Austrian Roman Catholic Church for a long time. This striking building was built in the High Victorian Gothic style back in 1898. Anaconda was surrounded by many mines and was the site of a huge ore smelter just outside of the town. There were a number of men who worked at the smelter that had immigrated from the Slavic nations that were part of the Austrian Empire. There was an Irish Catholic Church in the area but Father John Pirnat convinced the diocese to built this church for the Slavic residents. Gathering together in a church they were familiar with, helped ease the Slavic families transition into the American way of life. Father Pirnat held services there for fifty years.
Created by seagirl7 Published 14 September 2020
Why this advertisement?

I didn't like either and if I didn't argue LOOK the BLANK out she would start throwing things sometimes even knifes. And I don't mean butter or rubber knifes.
So I've been signal since 2005.

Docdee, I do like a good unheated argument (I consider them discussions.) However, my wife doesn't like them whatsoever. Terry

Also don't forget there are some people that really like to argue to no end.
My second wife was like that she LOVED to argue.

Well I feel as long as it's not meant to be some form of picking on people.
Or meant to be an insult then it should be all good.
Because you have a rite to voice your opinion, and you have feelings also.

Docdee, I generally feel more free to voice my opinion than many folks do. However, at the same time, I don't like to offend or upset other people. (With a few exceptions.) Terry

I wouldn't worry if I were you. So what if someone didn't like it.
Your doing the best you can do like most of us. If those few don't like it to bad.
Hack I get in trouble every day BUT I just don't care life gos on no matter what we say or do.

dblay, we don't see many pastors lasting in one church for that long in today's world. I read somewhere that out of every pastor that starts his career in his 20's, only five percent will still be pastoring when they reach their retirement years. Terry

This is HUGE and quite beautiful in it's own way. Reminds me a little of the Catholic church in the town close to where I live. That is amazing that Father Pirnat held services there for 50 years. Wow! Enjoyed the puzzle and THANKI YOU for sharing this.

magic, yesterday I posted a puzzle titled, "Historic Cabin." I responded to a comment in a way that evoked some "blowback." I believe we all had the same opinions but there was a little problem with semantics. I am a bit like our President, I will say or write something without weighing how it could be misunderstood. Terry

Hi seagirl7. As per usual, that is a very nice shot. I was intrigued by your mildly cryptic message about "yesterdays' response" Looked all over, but couldn't find what you were talking about. More than that, I am concerned about where you and Sue live and what is happening there. Are you guys safe?