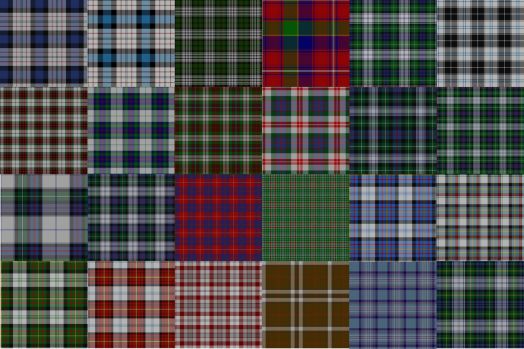 This one is Fs and Gs from Fergusons to Gordons, with a couple of MacKenzies thrown in for good measure, all iconic Scottish clan names whose history is interwoven with that of Scotland. Fergusons were known as the Sons of Fergus. The Scottish Gaelic patronymic is MacFhearghuis which can also be translated as son of the angry. They have spread across Scotland from as far as Ross-shire in the north to Dumfriesshire in the south. Not to mention South Africa, Canada, USA and Australia amongst other countries!

The Clan Fergusson allied themselves with the Clan Kennedy chiefs, the Earls of Cassillis in their feud against the Kennedy Lairds of Bargany. The Fergussons were part of John Kennedy, 5th Earl of Cassilis's band in 1601 when a skirmish took place at Maybole where the Kennedy Laird of Bargany was killed. The Ayrshire Fergussons adopted the Protestant faith during Protestant Reformation whilst Sir John Fergusson of Kilkerran fought for the royalists during the Scottish Civil War. The Fergusons of Argyll are descended from Fergus Mór, king of the ancient territory of Dál Riata (which occupied much of the west coast of Scotland). Other clan branches, including the Fergusons of Dumfries and Ayrshire, originate from Ferguson of Galloway, an important Scottish figure in the 12th century.

The Ferguson clan motto is "Dulcius ex asperis" (Sweeter after difficulties) and the clan crest is a bee on a thistle.

Clan Fraser of Lovat is a 700 year old Gaelic Highland clan, with its epicentre in the small town of Beauly 12 miles west of Inverness.The Frasers originated from Anjou in Normandy and accompanied William the Conqueror to England in 1066. Sir Simon Frazer held a portion of the lands of Keith in East Lothian and donated the church at Keith to the Abbey of Kelso in 1160. The Clan has historically dominated local politics and been active in every major military conflict involving Scotland. It has also played a considerable role in most major Scottish political turmoils. By the 14th century the northern Frasers formed two distinct groups, in the counties of Aberdeen and Inverness respectively, and there both made their mark. Of the former group, a forebear of the Fraser Lords Saltoun founded Fraserburgh about 1601; of the latter, Lord Lovat’s forebears had created one of the greater Highland clans at least a century earlier.

One of the most notorious Fraser Clan Chiefs was Simon of Lovat, known as The Old Fox. In a life packed with plotting and incident, Lovat became the most notorious double-agent of the age. he Old Fox became, by turns, a rebel Jacobite conspirator, a loyal British army officer, and government supporter. He spied for the Stuarts and the Hanoverian Kings. Born a Protestant, he converted to Roman Catholicism to follow the Stuarts. Mac Shimidh Mor to his kin (son of the Great Simon), Lord Lovat – somehow – kept ahead of his detractors and charmed his supporters for 60 years.

After the battle of Culloden, the Bonnie Prince escaped the manhunt for him. Lord Lovat became the British government’s most notorious prisoner. They put a ‘hook in the jaw of the great leviathan’, and locked him up in the Tower for a year. A 20th century novelist said Lovat was ‘the last and greatest of the old-style Scottish chiefs ’. A fellow Highlander, in 1747, said Lovat lived like a fox, but died like a lion, and, as a Highland chief should – that is, not in his bed.

The trial at Westminster Hall took seven days, with the first five consisting of evidence against the accused. On the sixth day he spoke in his defence, but the result was a foregone conclusion, and the guilty verdict passed at the end of the day. On the final day, his punishment of a traitor's death by hanging, drawing and quartering was announced, which was later commuted by the King to beheading. Simon Fraser, 11th Lord Lovat, was the last man to be judicially decapitated in Britain for his role in the 1745-46 Jacobite Uprising.

He remained sanguine in the days leading up to the execution, even exhibiting a sense of humour. The day of his execution, 9 April 1747, saw many spectators arrive at Tower Hill, and an overcrowded timber stand collapsed, leaving nine spectators dead, to Lovat's wry amusement. His laughter at this incident, even as he was executed, is said to be the origin of the phrase "to laugh one's head off". Among his last words was a line of Horace: Dulce et decorum est pro patria mori (Latin: "It is sweet and seemly to die for one's country"). He died, in his own eyes, as a Scottish patriot.

Oh my goodness, forget the celebratory 'wee dram' upon completion of this one-just please give me the bottle and a straw!

Seriously, loved this, totally worth the effort and I love the history. Who knew there was such a thing as a dress tartan for what must be 'everyday' and also one for the dance! Those blues...amazing.

Thanks so much and I *will* solve more of these!

The blues were soooo similar. Tough one but I love all your plaids ;)

What a challenge but enjoyable!

Glad to hear that Lori. We're all well I'm happy to say. I hope that you are also in a good place. F Jayne

I am having so much fun with these Tartans.
Thanks as always.
Hope all is well with you and yours.
Lori