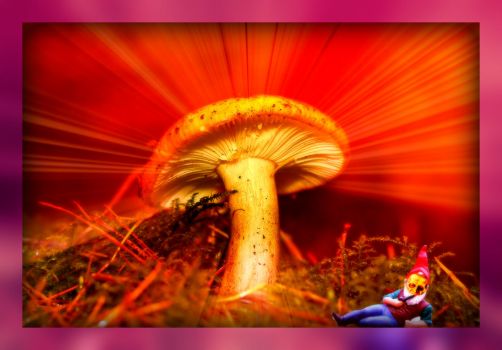 Today, I took a break from my postal duties, in order to chill for a spell under the sacred mushroom-thingy known in scientific terms as the lelabugosii vestafungii, and to the people of Bonga-Bonga as 'The Glory Of Seamen'..........
It gives off such a glow that it serves as a beacon to guide those in trouble near the rocky shore below - a service which it has been performing now for 175 years, as it is even older than sweetlittleoldgranny herself......
Legend has it that when the 'Glory' falls, there will be a tremendous loss of seamen, resulting in a
gradual decline of the population, and ultimately the fall of Bonga-Bonga itself, as we are all descended from seamen..............
Created by lelabugosi Published 20 November 2013
Why this advertisement?

That reminds me.... I haven't gotten my Thanksgiving turkey yet.

Although, my dear, you did return in the worst possible disguise!

a timely answer, I was about to make my own words up. that's me I'm out, poodle tip all!

I look forward to that lela because from what you say....they are not very tall yet....

Lela , were are your EARS ?

Thinking of seamen and Norbert and his quads....I sure would like to have an update on those babies before they start school...I would hate to miss their toddler days....

Maybe, like Elfie, they come from Viking stock some got as far as America years before Columbus. So I guess Bongland, wherever that is, was just another of their conquests

Tadpoles live in water so you must have seamen to take care of them, other people might be sea-sick.....

Well who knew the population of Bonga-Bonga is made up of seamen....with Norbert at the broom-handle factory and hundreds more tending the baby tadpoles and stomping on the tadpole wine I am shocked to learn this statistic....

It is not surprising that Bonga-Bongans depend on hallucinogenic toadstools.

Hi, Lelabugosi! Where is Cakes1947? I haven't seen none of her posting (jigsaw puzzles) lately.

Watch your sweeping generalizations, there, bugosi!

I myself am proud to be descended from a thoroughly landlocked Toledo Scales repairman (No Springs - Honest Weight) / Western Auto Store owner, not from some half-baked son of a sea cook!

Well, Hanne-with-pipe......I was thinking of placing unclebluebottle next to it - with a giant lightbulb on his head........

But when you know that these terrible things might happen some day, why don't you make a lighthouse next to it - dressed like a fungus - you need not put on light until it's necessary, but perhaps "Golden" will feel like having someone to "talk" with!! - and even stay longer than it ought to....

Taking a break from your postal duties to fulfill your pastoral duties....and protect your seamen....was there ever a more loyal Bonga-Bongo-ian........

This DOES explain a lot. Too much, in fact.

darn, now I've told those salty old guys they will have a god time with Jolly Roger, better hide. I'm off to bed anyway

do the Seamen get lured by the red light and end up on the rocks? It was ever thus